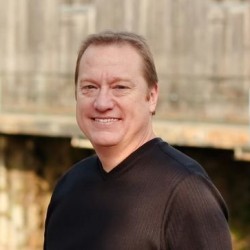 Many would think this is the same. 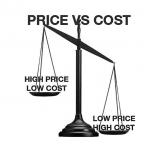 But the reality is they are not even close. The price is what you pay for a given item when you purchase from your vendor. The cost is based on how long it will last (dilution or longevity of item) and how effective it will work to make the job better, faster, or easier. Just because a gallon of floor stripper is five dollars less in price does not mean it is a good buy. What if the higher priced floor stripper has a dilution ratio four times higher (1: 4 vs 1:16) and works better at removing the finish quicker, better, and easier? Granted, you would spend less cash up front when you purchase the product but you will wind up purchasing more product to do the same amount of square feet and spend much more on labor because the product is not effective.

END_OF_DOCUMENT_TOKEN_TO_BE_REPLACED

Effective June 1st of this year, The Globally Harmonized System of Classification and Labeling of Chemicals (GHS) system went into full effect. For many, GHS is something totally brand new, but the roots of this new system are anything but new.

The groundwork for GHS was first laid out in 1992 by the United Nations. With the rate of international trade of chemicals between different countries and continents on the rise, with no sign of reversing course, the need arose for a universally based system to warn end users of possible dangers contained in their chemical products. There are many similarities between some of the regulations, pictograms, and definitions and those found in Department of Transportation regulations and other OSHA regulations. Other countries have found similarities as well, but what GHS has done is eliminate any of the possible discrepancies that would occur when a particular chemical product was shipped from one country to another, and the label was foreign to the end user, causing confusion.

END_OF_DOCUMENT_TOKEN_TO_BE_REPLACED 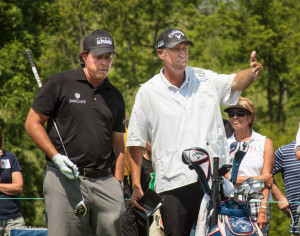 Every profession has their own set of supplies and equipment needed to complete their hourly, daily, weekly, monthly, and seasonal tasks. The selection of the appropriate equipment can appear simple and unscientific to the untrained eye. Think of this next time you’re watching a professional golf tournament on TV. A golfer’s caddy carries a bag with a large assortment of clubs. Does he select any club at random, or is there reasoning behind the final selection of a club?

You better believe there is a well thought out determination on which club to select. Variables such as the ball’s position on the course, the terrain of its location on the course, and distance from the hole play into the selection process.

The same can be said for a facility’s floor maintenance staff prior to the start of their work. END_OF_DOCUMENT_TOKEN_TO_BE_REPLACED

The numbers are simply astounding. At last count, there are over one BILLION people (yes billion, not million) on Facebook. The amount of people on Facebook is comparable to the population of the most populous country on Earth, China. Every other country has a population less than Facebook.

There are over 302 million people on Twitter. While that number may seem paltry in comparison to Facebook, that number in perspective is also quite astonishing. The amount of people on Twitter is greater than the populations of Mexico, Canada, France, and the United Kingdom COMBINED! And, adding to these eye-popping numbers is the latest revelation that Instagram is right on the heels of Twitter in terms of total overall users, as they have eclipsed the 300 million mark.

Some may still have the outdated perception that social media networks are populated mostly through teenage girls posing for “selfies” and hipster bloggers in downtown coffee houses. The reality today is that these large user numbers could not be achieved without participation from people in virtually every walk of life, across almost every demographic. Among the demographics represented on social media today, in abundant numbers, are business owners and professional decision makers. In other words: YOUR CUSTOMERS, YOUR TARGETS, YOUR SALES PROSPECTS.

END_OF_DOCUMENT_TOKEN_TO_BE_REPLACED 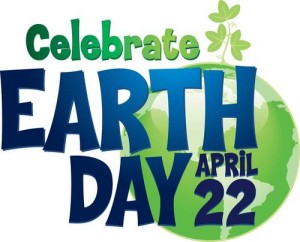 Wednesday, April 22, 2015 marks the 45th anniversary of the first Earth Day. On April 22, 1970 a new campaign launched to increase awareness of the dangers of pollution on our environment, at a time when the word environment did not have a large presence in our national vocabulary. At the time, the burgeoning movement had many challenges which have since been met. But now, 45 years later, new challenges and roadblocks still pose an impeding presence. 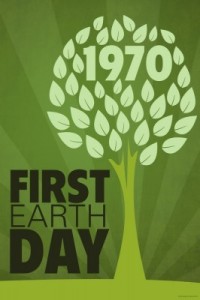 logo from the first Earth Day in 1970

April of 1970 was a far different world than the world we live in now. Computers were huge monstrosities used by organizations like NASA, not a small device that fits in your pocket, which also allows you to make phone calls. The Super Bowl was still in its infancy, not yet the national craze and source of an unofficial holiday. A war raged in Southeast Asia and American college students were subject to being involuntarily drafted into the armed services.

The prospect of being drafted into a war they did not agree with led many students into large, visible, public protests. Around the same time in 1969, a Senator from Wisconsin, Gaylord Nelson, was a first-hand witness of the damage caused by an oil spill off the coast of Santa Barbara, California. Seven years earlier, Rachel Carson authored her New York Times bestseller Silent Spring, which was the unofficial kick start to what we now know as the modern environmental movement. But, despite the best-selling status of Silent Spring, the American public was largely unmotivated or unconcerned enough to do anything of substance to change the way society operated in order to reverse the negative effect of pollution. It was then, in 1969, when Senator Nelson had the vision to channel the energy of the Vietnam protests on college campuses and create a similar energy and awareness for the environmental movement. 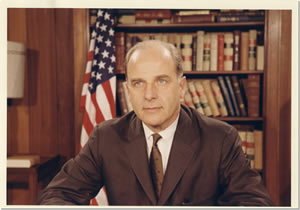 Senator Nelson’s vision became reality and blossomed into the movement we see today. In 1995 he was awarded the highest honor a civilian American can achieve, the Presidential Medal of Freedom by President Bill Clinton.

END_OF_DOCUMENT_TOKEN_TO_BE_REPLACED

For me cleaning in a systematic routine is best. 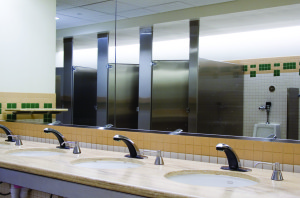 The systematic approach ensures that I not only don’t forget any items, but also make sure everything is completed to the best of my ability. I have segmented cleaning for restrooms into eight easy steps that follow an order and purpose. This approach has worked well for me, and I am positive it will work well for you. The steps are as follows:

END_OF_DOCUMENT_TOKEN_TO_BE_REPLACED

Welcome to the newest addition to the new nclonline.com!

All of us here at National Chemical Laboratories are extremely excited about this new venture. In the very near future this blog section will become a key destination for everyone connected to the Janitorial Maintenance and Cleaning Chemical industries, from end users to distributors to facility managers.

Here on our end, we will draw off the knowledge and experience of our arsenal of industry professionals to impart valuable information that will add to your knowledge base and make you better at your job, no matter what level you are in your organization. This section of nclonline.com will soon include valuable insight into various aspects of our industry, suggestions on how to overcome difficult situations at various facilities, and tips on how to improve efficiency and profitability.

END_OF_DOCUMENT_TOKEN_TO_BE_REPLACED 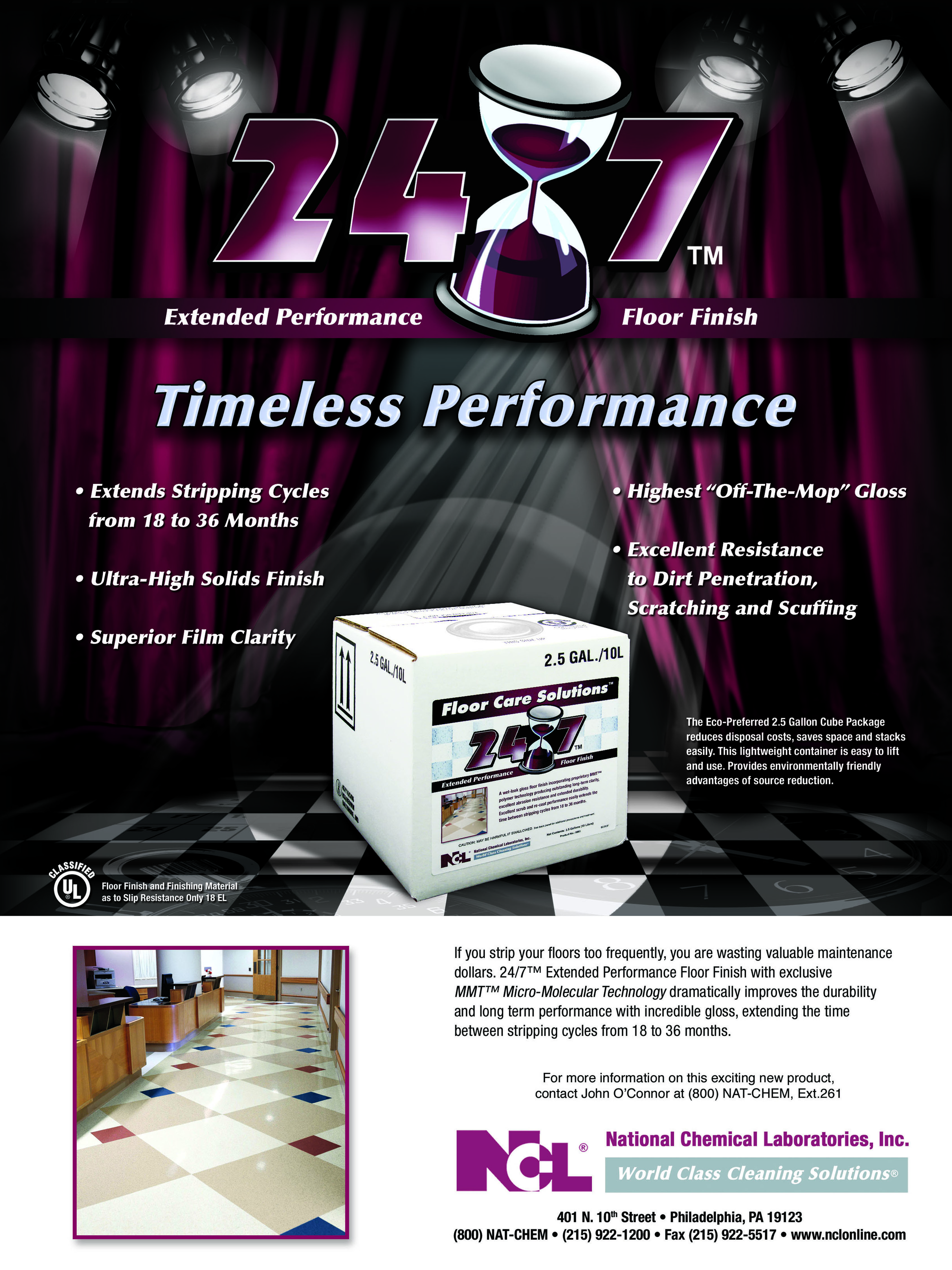