The numbers are simply astounding. At last count, there are over one BILLION people (yes billion, not million) on Facebook. The amount of people on Facebook is comparable to the population of the most populous country on Earth, China. Every other country has a population less than Facebook.

There are over 302 million people on Twitter. While that number may seem paltry in comparison to Facebook, that number in perspective is also quite astonishing. The amount of people on Twitter is greater than the populations of Mexico, Canada, France, and the United Kingdom COMBINED! And, adding to these eye-popping numbers is the latest revelation that Instagram is right on the heels of Twitter in terms of total overall users, as they have eclipsed the 300 million mark.

Some may still have the outdated perception that social media networks are populated mostly through teenage girls posing for “selfies” and hipster bloggers in downtown coffee houses. The reality today is that these large user numbers could not be achieved without participation from people in virtually every walk of life, across almost every demographic. Among the demographics represented on social media today, in abundant numbers, are business owners and professional decision makers. In other words: YOUR CUSTOMERS, YOUR TARGETS, YOUR SALES PROSPECTS.

Even if most industries have made the shift toward social and viral marketing, the janitorial sanitary industry surely would be the lone holdout, right? The perception of this industry as one resistant to change, resistant to move forward, and stubbornly old-fashioned is not only incorrect, it is a perception that will harm those of you who choose to embrace the perception, which in many cases in nothing more than a convenient excuse for laziness.

The question then lies…..Since when did you start mirroring your competitors?

How many times have you sat in your offices or conference rooms and attempted to brainstorm avenues in which you can set yourself apart and stand apart from your competition? Here is your golden chance. Because, even though your rivals are absent from social media, chances are that among the billions active in one way or another on social media, lie not only your customers, but also those future customers which your sales and traditional marketing staffs have failed to connect with.

The advantages to embracing social media to market your janitorial sanitary maintenance business are too numerous to ignore.

Now that you know the advantages of utilizing social media to grow your Jan San business, the next step is to find your niche. There are many different social media vehicles out there, but that does not mean you have to be active on each one. Some businesses find success with Facebook. However, new algorithms introduced by Facebook recently have made it more difficult for companies to market their products and/or services organically. Facebook is evolving into a medium where only companies who pay to advertise will reach whom they need to reach. It would be your determination whether an investment in Facebook should be a part of your advertising budget or not. Other social media vehicles, however, can still produce results without agreeing to an advertising flight.

Others prefer Twitter for reaching the consumer market and end users down at the end of the chain. In business it is suggested, however, that a must-have social media presence is on LinkedIn.

For those unfamiliar, LinkedIn is a social media network dedicated to business professionals and networking. LinkedIn lacks the multimedia “fun” and pop culture trending capabilities of other social media sites, but as someone in business, ignoring LinkedIn comes at your own peril.

For years, many sales professionals in the janitorial sanitary maintenance industry, along with virtually all other industries, relied on cold calling (either via telephone or boots-on-the-ground, physical door knocking) to increase lead generation into the sales funnel. It was time consuming and inefficient, but it was all many people knew, especially when starting out. Seasoned representatives later came to learn that true success and true customer base growth, came not from how many doors you knocked on or how many numbers you dialed. The success came from how well you leveraged your already existing contacts into new leads. Initial conversations were not cold anymore, since you were introduced by your contact, making that first interaction a warm call. 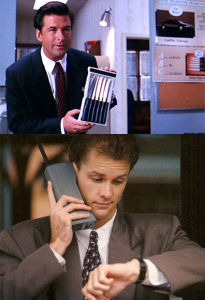 (Top) Alec Baldwin from the 1992 New Line Cinema film Glengarry Glen Ross displaying the 2nd prize in the sales contest. (Bottom) An example of how one who does not move with the times appears to others.

The funny thing is that it is not just the seasoned veteran who has a contact base to network to and from. LinkedIn provides a venue to easily leverage your pre-existing network into a lead generation source, even if you’re just a rookie. In many cases an hour on LinkedIn can produce better long term sales results than an entire day of door knocking and “dialing for dollars”. The days of Tin Men and Glengary Glen Ross selling styles are as relevant today as whitewall tires, 8-track players, or the Motorola brick phones made famous by Gordon Gecko and Zach Morris. Do you channel your inner Alec Baldwin and tell your staff that coffee is for closers? Would you prefer one of your reps spends their afternoon meeting a prospective client at a Starbucks after getting an introduction through a mutual LinkedIn contact, or would you prefer he or she was out “pounding the pavement”, “schmoozing secretaries”, and getting ignored by decision makers? Yet, many companies, in our industry and others, still insist on utilizing these tactics. Not because they are successful, but because they are familiar. It is not too late to jump on-board with LinkedIn, plus other consumer geared social media sites, and leave familiar failure aside in favor of new found success.